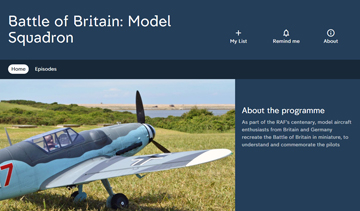 As part of the RAF’s centenary, model aircraft enthusiasts from Britain and Germany recreate the Battle of Britain in miniature, to understand and commemorate the pilots.

The model squadron re-enact the early events of the Battle of Britain, from 4 July 1940, with model Hurricanes, Stukas and Messerschmitts that can shoot each other down

Check out the article on our website for plans on the 2021 Slot Car Season. It also includes updates on the fantastic track refurbishments completed over the last year! ... See MoreSee Less

Slot Car 2021 Post Covid Season and Track Updates Posted By: James Savidge May 11, 2021 Racing is back, almost, please see our plans for reopening and the shortened 2021 season below. As people will b...
View on Facebook
· Share

Some good news on the horizon! Please check out our Covid-19 information page to see the current plans for the resumption of club activities as lock-down is eased via stages. Looking forward to seeing everyone again soon! ... See MoreSee Less

Covid-19 Updated: 3rd March 2021 During this current global pandemic, our members health and safety is of upmost importance and our number one priority. This page is designed to be your single point o...
View on Facebook
· Share

When this happens, it's usually because the owner only shared it with a small group of people or changed who can see it, or it's been deleted.
View on Facebook
· Share

Bored of cheese and mince pies? Enjoy this look back at the BBMF Spitfire flypast from our Model Show in 2014! ... See MoreSee Less